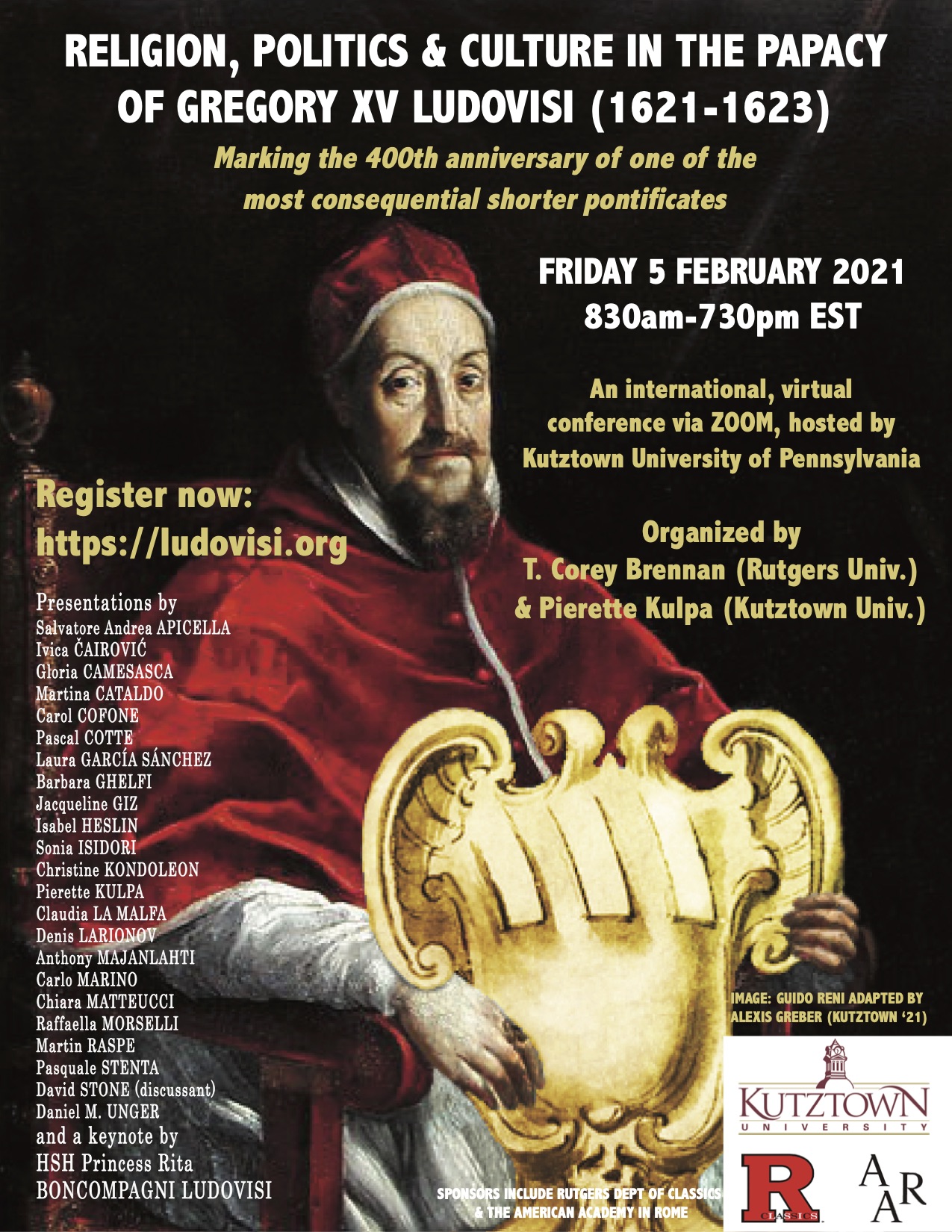 A call for papers..

Sponsors include Department of Classics, Rutgers University, and the American Academy in Rome Questions? progettoludovisi@gmail.org

We aim to cover a wide range of aspects—political, diplomatic, theological, cultural—of the pontificate of Gregory XV Ludovisi (1621-1623), in a one day virtual conference on Friday 5 February 2021 (9am-7pm Eastern US time). The recorded presentations will be closed captioned for accessibility.

This conference is meant to anticipate the 400th anniversary of the election of Alessandro Ludovisi as pope on 9 February 1621. At the time, few must have expected the frail 67 year old Bolognese cardinal to live long enough to make much of a difference with his pontificate, beyond perhaps resolving the most urgent political challenges he inherited from his predecessor, Paul V Borghese (reigned 1605-1621). Yet before his death just 29 months later (8 July 1623), Gregory XV Ludovisi registered an impressively broad series of accomplishments that invite renewed attention, analysis and critique.

A highly capable mediator, Gregory XV and his administration quickly developed an interventionist foreign policy that scored conspicuous successes in Bohemia (then the epicenter of Protestant resistance to Catholic Habsburg rule) and in the hotly-disputed Valtellina region in Lombardy. He canonized five saints—one more than Paul V did, and indeed all on the same day (12 March 1622)—including Ignatius of Loyola and Francis Xavier, who were the first Jesuits to be admitted to sainthood. He massively invigorated the Church’s foreign mission work by creating the Congregation for the Propagation of the Faith, which to the present day has directed and animated Catholic evangelization. Furthermore, he reformed the process of papal elections, introducing rules that lasted untouched until the early 20th century. It is with good reason that the Ludovisi pontificate is commonly counted as one of the more important papacies for the post-Reformation church since the Council of Trent in the mid-16th century, and indeed as one of the most consequential shorter pontificates ever.

The papacy of Gregory XV also marks a significant cultural moment in Rome. In 1621, his young nephew, the newly-created cardinal Ludovico Ludovisi, purchased and started to redevelop a section of Rome’s Pincio hill that corresponded in part to the ancient Gardens of Sallust. His vision was to create a dramatically landscaped urban villa, all within the ancient city walls, that could compete with the adjoining property of the Borghese family. For his new ‘Villa Ludovisi’, the cardinal quickly formed a large and eclectic collection of art, significant especially for its classical sculptures, many of which are exhibited today in Rome’s Palazzo Altemps museum, and its mural painting by contemporary Bolognese artists commissioned for the cardinal’s secondary palace, the Casino Aurora. For the two and half centuries after the pontificate of Gregory XV, the Villa Ludovisi maintained its position as a principal destination on the Grand Tour, until its gardens were handed over to developers in 1885 for the creation of a new, elegant business and residential quarter. Of cardinal Ludovico Ludovisi’s two Villa palaces, one is partially preserved today within the compound of the US Embassy in Rome, and the other—the Casino Aurora—remains a private residence of the head of the noble Boncompagni Ludovisi family.

In scholarly terms, the time certainly seems right for this virtual conference, even without the 400th anniversary of the Ludovisi pontificate. To focus here only on unpublished materials: in 2010 HSH Princess Rita Boncompagni Ludovisi made the surprising discovery in the Casino Aurora of a large cache of historical documents—well over 100,000 pages dating back to the 1400s, organized in about 2400 folders, “orphaned” from the much larger collection that the Vatican Secret Archive acquired from the family in 1947 (with published inventory appearing in 2008). An overview of these archival items, now completely digitized, can be found at the website for the Rutgers-based project formed to highlight these finds, the Archivio Digitale Boncompagni Ludovisi, and at its partner Google Arts & Culture platform. One of the more important documents that has newly come to light is a manuscript copy of an unusually valuable contemporary (ca. 1633) biography of cardinal Ludovico Ludovisi by his personal secretary Lucantonio Giunti, transcribed by a team of undergraduate students at Kutztown University under the direction of Pierette Kulpa.

There have been other recent advances in understanding sources relating to the pontificate of Gregory XV. These include a campaign to photograph the mural paintings of the Casino Aurora in extreme detail by specialists from the Laboratorio diagnostico per i Beni Culturali of the University of Bologna at Ravenna, as part of a project Guercino: Oltre il colore. Furthermore, a collaboration between Professor Bernard Frischer (Indiana University) and Geostudi Astier SRL (Livorno) has resulted in a comprehensive non-invasive underground survey of the Casino Aurora and its grounds, and the creation of a 3D model that sheds much new light on the Roman-era origins of this area, and its later development through the 17th century and beyond.

There is much more that can be said, especially about the range of specialized and general published scholarship, from multiple disciplinary perspectives, that has appeared in the past few decades on the era of Gregory XV. In short, this virtual conference aims to offer those with an interest in the Ludovisi papacy an opportunity to assess recent contributions on the subject, to share fresh research and analysis, and to reappraise this pope’s immediate impact and later relevance.